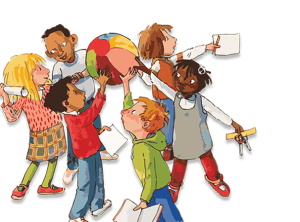 The team building sessions created excitement amongst the children for the ‘reading missions’ that were to come. At the start of the sessions the children found it difficult to listen to the ideas of others and to extend their own ideas when speaking but were more comfortable with this by session 15. This is an area that will hopefully develop through the whole think 2 read scheme.

The children particularly liked the sessions where they looked at their own strengths and weaknesses. However, when filling the self-evaluation sheets in it was important to remind them to be honest as the children did not really like to admit that they found things difficult. This made allocating them a role more difficult and roles were allocated by session 8 once I had got to know the children better.

Some of the sessions were easier to deliver back to back as the children seemed to respond better and develop the language of agree and disagree within prolonged sessions whereas after a few days away from the scheme they needed a lot of prompting to remember the language structures again.

The team role badges really helped the children to engage with their own role within the group. As the sessions went through the responsibilities of each role the children became quite animated when it was their role that was being discussed. At first it seemed like a lot of information for the children to take in but it was definitely worth taking the time to study the roles in detail as now all members of the teams understand what the other members should be doing and know exactly how they personally contribute to the group.

The children were engaging with each other more by the end of session 15 and understood clearly what being a good listener entailed. This took quite a lot of reinforcing but it has paid off as all of the children, whatever their ability can explain how to be a good listener.

We are looking forward to starting the reading missions next week.